The 1851 Census details the McArthur family as follows:

The household had one servant, a local middle age woman called Isabella and a cousin Mary A Hudson also from Dublin Seemed to live with The McArthurs. 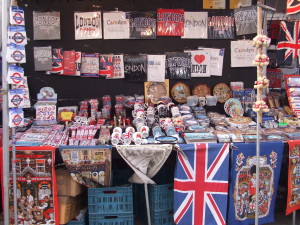 Mary McArthur moved again to a house on South George’s Square in Worcester. This was to be Emily’s grandmother’s last home. She died at the same address on July 27th 1855 of apoplexy (a stroke) she was only in her late 50’s.

Mary McArthur was in her early thirties when widowed. Her husband left her and their children well provided for when her died. Unlike her sister Charlotte, who was also widowed early in her marriage, Mary never remarried. She may have found herself alone with two children under three, but her mother was still alive and her sisters still lived locally providing company and solace. 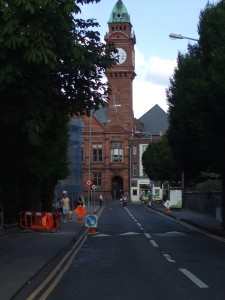 Modern day Rathmines. The McArthurs lived there at the time of Richard’s death.

Mary McArthur lived in Rathmines for some time after her husband’s death, but seemed to live a few different addresses around Dublin before emigrating to England. There are records of her living at Merrion Ave and Cullenswood in the 1830’s when Richard Jr. and Emily were growing up.

The family moved to England when Richard completed his education at Trinity College, Dublin, from where he graduated in 1849. Richard was ordained a priest at Ripon, Yorkshire in 1850 this is reflected in the 1851 census stating the McArthur’s as living in the village of Burton Leonard, near Ripon. 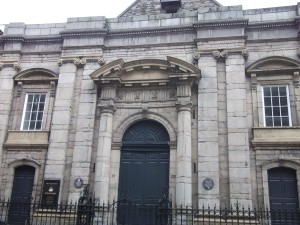 After their marriage in 1825 Richard and Mary McArthur settled in the Cullenswood area, which encompassed modern day Rathmines. A year later their first child was born, a son, who they named Richard Lyons.

Richard was still involved in the book trade when Richard Jr. was born, but a year later he mysteriously left the Dublin book trade. His quick exit was noted:

“Hodges teamed up with one McArthur until 1827, when McArthur vanishes and the firm becomes Hodges and Smith.”

He returned home to Ardglass, Co. Down where his second child Emily, Emily’s mother was born. Nearby Belfast had a burgeoning book trade at that time too so it is possible that the family hoped to settle there. It is unclear how long they stayed in Co. Down. The next reference to Richard McArthur is on April 1st 1829, which sadly was his death announcement in the newspapers.

It was apparent that he had some health problems and that he had returned to Dublin hoping for a cure, but that was not to be.

Richard McArthur was originally buried in St. Peter’s Graveyard of St. Peter’s Church, Aungier Street, Dublin, the same church he was married in only a few years before. In early Eighties the church was demolished. He along with others were re-interred in St. Werburg’s Churchyard near making the city centre church his final resting place. 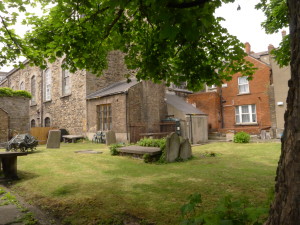 Larry O’Neill for his photos of St. Werburg’s 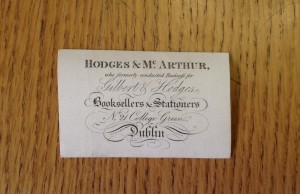 Emily’s grandfather’s business Card of. Courtesy of the National Library of Ireland

In 1817, Gilbert was now an elderly man and the partnership between Gilbert & Hodges was dissolved. Emily’s grandfather Richard a loyal employee entered the partnership in place of Gilbert and the business became Hodges & McArthur. By now Richard McArthur had began traveling afar sourcing books for a faithful client, Lord Mountbellew, whose large estate was in  Co Galway. From their correspondence, it is plain to see that they had good business relationship, which seemed to stem from their mutual love and appreciation of books. So much so that on his “honeymoon” in Paris and London of 1825, Richard McArthur still had time to source and send on a shipment of books to the Lord.

At the time Richard McArthur traveled between Dublin and France it was easy to buy entire libraries once owned by the fallen French aristocracy quite cheaply, and he may have made a good living by doing so. 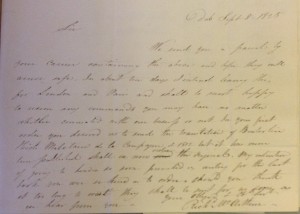 Letter from Richard McArthur to Lord Mountbellew about a book buying trip to London and Paris. Courtesy of National Library of Ireland.

Richard McArthur was originally from Ardglass Co Down. Little can be told of his early life and background only that he was well educated and a gentleman. A bookseller by trade, he arrived in Dublin in the beginning of the 1800’s. He worked with Gilbert & Hodges, booksellers and stationers of College Green as early as 1812, a loose receipt signed by him confirms the date. It appears from the few remaining documents from the business that his role was, locating and distributing books to clients.

Receipt for books sold by Richard McArthur to Lord Moutbellew. Courtesy of National Library of Ireland

He may have relocated to Dublin, because at that time it was a hub for printing and publishing, providing better opportunities than nearby Belfast. The move proved a good decision for Richard for in 1817 he was made a partner in the business, when Gilbert left, and it was probably in the same bookshop he first set eyes on his future wife Mary. There are records to confirm that Mary Graisberry’s family printed medical books sold by Gilbert & Hodges over the years.

The Oxford History of the Irish Book, Volume IV: The Irish Book in English By James H. Murphy. P 578