“To E. Weddall; Thanks for a fish”. Was the message written by George Moore on the front page of his book, Hail and Farewell, when he signed it for Emily Weddall in 1913. The meaning of that dedication is lost in time, and can only be guessed at. Perhaps she gave him a fish or served it up at a dinner he attended at Rockfield House on his visit to Achill that year.

He and Emily had become friends or at least acquaintances sometime in the early 1900’s or even earlier if it was though the Gaelic League.

Emily and George Moore had quiet a few people in common, besides the Gaelic League they met in artistic circles too.  His sister Nina Moore  was married into Emily’s good friend Eva O’Flaherty’s family. He was a friend of George Russell and mixed in similar circles to Darrell Figgis. 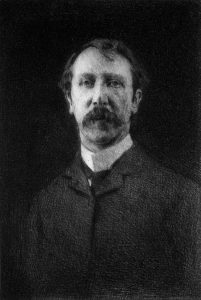 George Moore was born in 1852 to landed gentry in Moore Hall on the shores of Lough Carra in County Mayo. He was educated in a catholic school, Oscott College. He had little interest in study and at the age of 16 he was expelled for “Idleness and general worthlessness”. A further vain attempt was made to educate his further by the old parish priest. George went to live in the family home in London, where he developed a love for horse racing and art.

After his father’s death he inherited a substantial amount of land in Mayo and Roscommon, which was poor and did not yield a great income. He did not enjoy being a landlord and went to live in Paris to become an artist instead. He did not have a great talent for painting but found success as a writer. He returned to Ireland in 1901 and became involved in the Celtic Revival in Dublin.