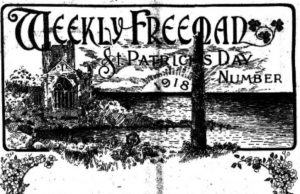 St. Patrick’s day 1918 fell on a Sunday, it was still war time, so the celebrations were kept to a minimum. The official holiday was only fifteen years in existence, since it started in 1903. Drinking alcohol was allowed on St. Patrick’s Day in 1918, it was banned in 1927 till the 1970’s when the population was again free to indulge in “the drowning of the shamrock”.

Some prominent people were against drinking on the holiday, including Countess Markievicz who was opposed to drinking, as she put it:

“I do not see why rich people should not be kept off their drink as well as poor”.

James O’Mara the Irish MP, in Westminster, who introduced the bill later opposed any drunken revelry, citing that it was “a direct insult to the Saint”. The Gaelic League were pro preserving the day as a dry holiday too.

The holiday went ahead on Achill, where it was celebrated since 1882:

“When the local clergy called for a special effort to be made on Saint Patrick’s Day 1882 to celebrate fourteen and a half centuries of the arrival in Ireland of Saint Patrick 432 A. D. the Dooagh musicians and their members from Keel decided to parade to Mass at Dookinella, the only church in Lower Achill. The people who normally walked to Dookinella anyway, paraded behind the Band. The first Parade was such a success that the custom has continued ever since.”